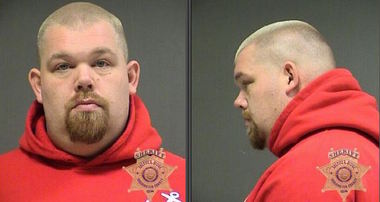 Nathaniel Wisher came to work at the Washington County Courthouse one January morning and brought with him a backpack containing two loaded handguns.

Wisher, 32, was one of the unarmed security guards employed by DePaul Industries to oversee the courthouse entrances. The guards monitor visitors as they pass through metal detectors and scan personal belongings for weapons or other banned items.

But at his trial this week on felony charges of possession of a firearm in a public building and coercion, Wisher said he didn’t know the guns were in his backpack when he entered the building in downtown Hillsboro. He only realized the mistake hours later, he testified.

Jurors in Circuit Judge Suzanne Upton’s courtroom acquitted him Friday on both counts.

“It was a bad attempt at flirtation,” prosecutor John Gerhard told jurors.

Wisher told a co-worker in the morning that he had some guns in his backpack, the prosecutor said. Wisher told her he was an uncover cop, Gerhard said, but she didn’t believe him.

At noon, Wisher mentioned the guns again, Gerhard said. And toward the end of the day, he pulled a black pistol out of his bag and showed it to her.

“If you get me in trouble for this, I will send someone to your house to take care of you. I know where you live,” she recalled him saying.

The coworker felt conflicted about reporting the incident because Wisher was her friend, Gerhard said. But she ultimately decided to tell her boss, who reported it to the sheriff’s office.

When a deputy asked Wisher about the guns, the security worker said he’d accidentally brought the weapons into the building.

Defense attorney Ryan Corbridge said his client was in the courthouse with the guns, but the day’s events didn’t happen as authorities described them.

Wisher’s mistake was unintentional, the lawyer said, and the crime of possession of a firearm in a public building requires intention. And the coercion simply didn’t happen, he said.

Wisher had gone target-shooting the day before, Corbridge said. Afterward, he had stored his two handguns in the backpack and forgotten to remove them before entering the courthouse the next day.

Near the end of his shift, Wisher reached into his backpack to take out his phone charger, the lawyer said, and that’s when he noticed the guns, to his surprise.

Corbridge indicated the coworker was lying about Wisher’s statements to her.

The prosecutor said the co-worker had no reason to lie and urged jurors to believe her.

“The defendant is telling you an absurd story,” Gerhard said. “It’s unbelievable.”

People who own firearms are likely to know the whereabouts of their weapons, he said. And in Wisher’s case, he said, it was even less probable that he could forget about his guns because he needed them later that day for an after-hours job he had in Portland working as an armed security guard.

DePaul Industries did not immediately confirm Wisher’s employment status Friday. His attorney told jurors “he hasn’t been engaged” with the company since the incident.